Believe in Yourself and Achieve Anything! 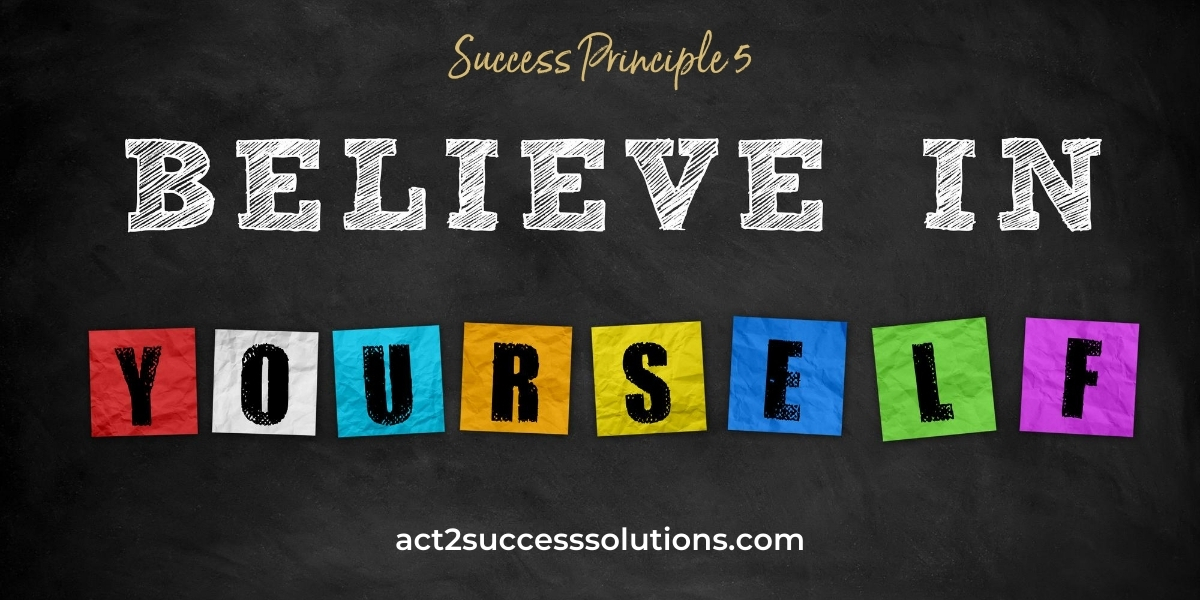 Believing it’s possible to be, do and have what you want is the first step – I talked about this in my last blog post. The second step is to believe in yourself. Think back to the BE, DO and HAVE lists you made during the vision exercise. That exercise helped you identify many aspects of your dream life, and now you need to put the wheels in motion on your success journey towards creating it! You have what it takes – self-confidence, self-esteem or self-assurance – a belief that you can use your current talents, skills and abilities AND learn more if necessary to achieve the results you desire.

Believing is a choice, so believing in yourself is also a choice. Some of us grew up with parents who supported and encouraged us to believe in ourselves, but many people grew up in an environment filled with limiting beliefs and negativity. My Dad was my biggest cheerleader 📣 – he helped me believe in myself and my dreams. Regardless of your upbringing, take responsibility for your self-concept and believe that you are capable of achieving whatever you decide to be, do or have.

Many successful people share stories about not allowing their lack of talent/skill/ability hold them back – they started with a belief in themselves and did whatever it took to achieve their desired result.

You Get to CHOOSE What You Believe About Yourself

You know I love stories to illustrate a point…
Victor Serebriakoff was a Russian descendant living in the slums of London. Victor’s teachers didn’t believe he’d finish school or get a decent job, so they recommended he drop out of school. They called him a “dunce.” Victor believed what his teachers told him – instead of believing in himself – and left school at 15, living on the streets and working menial jobs to survive.

Victor enlisted in the British army at the age of 32 and his intelligence test indicated he had an IQ of 161 – at the genius level. I’m sure you can imagine Victor’s astonishment when he learned the results, having been told by his teachers that he was a dunce! From that point on, Victor chose to believe he was a genius and he also began to act like a genius. After training recruits in the education corps of the army, Victor left to join the timber industry. His many successes included chairman of the national timber standards commission as well as inventions and patents which revolutionized the industry.

Victor wasn’t stupid. As a young boy going to school in London, he had the same intellectual potential he had when he discovered his actual IQ score at the age of 32. The difference was that as a young boy, Victor chose to believe his teachers; as a 32 year old, Victor believed the IQ test results that he was a genius. From this point on, he began living up to his ultimate potential. This story demonstrates the power of choice – the choice to believe in yourself and your potential. Ask yourself – is there genius hiding inside of you?

Eliminate “I Can’t” From Your Vocabulary

Successful people have eliminated the disempowering words “I can’t” from their vocabulary. When you say “I can’t” you become weaker. Have you heard of applied kinesiology – also known as muscle testing? This is an incredible way to demonstrate the power of negative words and phrases on us. At the Breakthrough to Success event I attended in August 2019, volunteers were asked to extend their left arm out to the side, think about something they can’t do and then say it out loud. When the volunteer thought “I can’t play the piano” and they said it out loud, their arm was weak and could be pushed down easily. When the volunteer changed their thinking from “I can’t” to “I CAN” – and they thought “I can play the piano” while speaking it aloud, their arm was stronger and couldn’t be pushed down. This exemplifies what we think and what we say truly impacts our bodies.

We’ve all been late to something and missed important information as a result. Here’s another great story – George Dantzig was a math graduate student at UC Berkeley who arrived late for his statistics class one day. On the blackboard were two problems George assumed were his homework. He later worked on solving these problems, not knowing at the time that they were supposedly “unsolvable”. George felt the problems were harder than usual, but turned in the solutions a few days later because he still thought they were homework. He was later quoted “If I had known that the problems were not homework, but were in fact two famous unsolved problems in statistics, I probably would not have thought positively, would have become discouraged, and would never have solved them” (The Success Principles by Jack Canfield). George’s story illustrates that when you pursue goals free of limiting beliefs, your results can be extraordinary!

You may think it’s too late for you to pursue your dreams and goals, or that you’re too old. You think your window of opportunity for success has closed. Here are a few examples of people who didn’t allow their age to limit them. Famous chef Julia Child 🍲 learned to cook at almost 40 and launched her popular television show The French Chef at age 51. In 2009, Susan Boyle 🎼 was 48 when she sang “I Dreamed a Dream” on Britain’s Got Talent and propelled her singing career into Grammy nominations, eight record albums and multi-millionaire status. Ray Kroc 🍔🍟 spent two-thirds of his life selling paper cups and a milkshake machine when at the age of 52 he connected with the McDonald brothers and helped them franchise their hamburger restaurants nationally. The brothers sold their shares to Ray after seven years and he later became a billionaire. Grandma Moses (Anna Mary Robertson Moses) 🎨 was an American folk artist who began painting at age 76 and continued until her death at age 101. Her canvases sold for $3 in the beginning and later, for over one million dollars.

No Degree? NO PROBLEM!

Believing in yourself has proven to be more important to success than a college degree. Statistics reveal that many millionaires and even billionaires didn’t attend college. Continuous learning and development is critical to success, but a degree is not. Both Mark Zuckerberg and Bill Gates dropped out of Harvard before completing their degrees.

You’ve heard the saying “What other people think of you…”

We’ve all heard Regina Brett’s quote “What other people think of you is none of your business.” Remember this when thinking about your dreams and goals – because you might not accomplish them if you require others to believe in you. Don’t waste time worrying about what others think of your dreams and goals. Focus instead on believing in yourself – believe you CAN and then work towards achieving what you want to be, do and have.

If I had to guess, your home is filled with examples or symbols of your success. Do you have your diploma, degree or certificate framed? How about sports medals or trophies? Maybe an award or letter of recognition? If these are hiding in your basement, garage or closet, get them out and display them proudly! These are all part of your success story and important reminders that you can achieve results.

What was an “I can’t” that you turned into an “I CAN” – that you achieved?!
Please share in the comments!