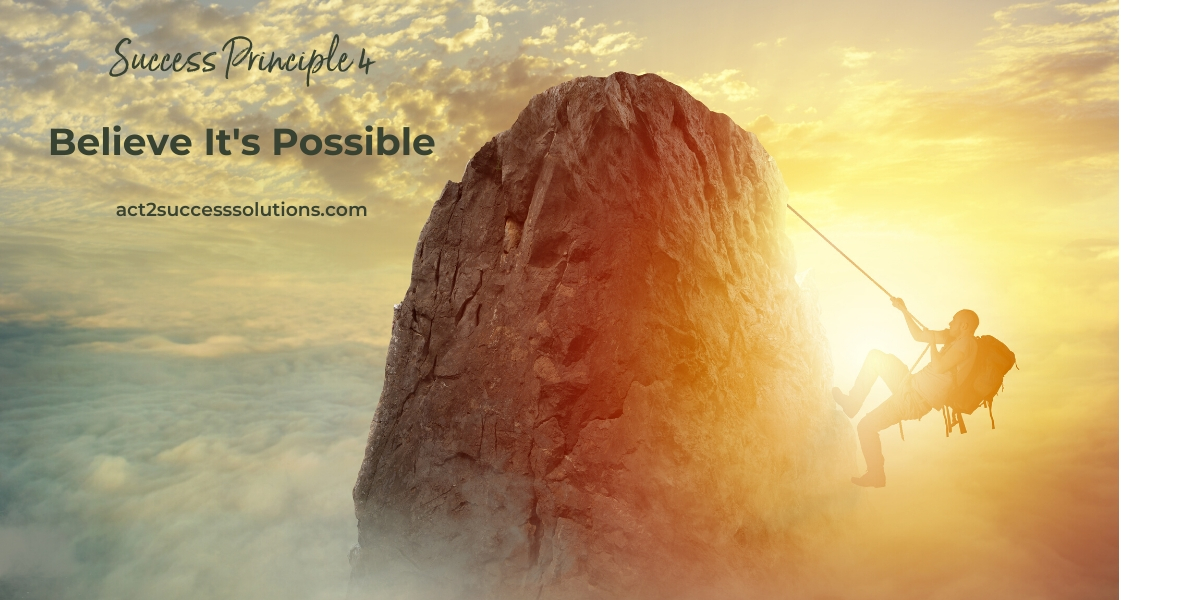 After reading my last blog post, you’ve made a long list of all the wonderful things you want to BE, DO and HAVE! My list is long, too – and the best part is that I add to my list as I check things off (✅ ACCOMPLISHED!). Now that you’ve identified what you want to be, do and have, the next step is to BELIEVE it’s possible to achieve.

Have you ever thought about doing something and then talked yourself out of it, not believing it was possible? Your next thought was of other people who’ve also done what you want to do – and that was PROOF someone else had success! That proof helped you see it was in fact possible for YOU to move forward, too. I’m the perfect example of this – I saw many of my friends becoming entrepreneurs starting their own businesses, and I believed I could help others with my business, too! Hello, Act 2 Success Solutions. Chances are, what you want to do has been done before, so do your research, learn from others (especially their mistakes) and believe it’s possible for you, too!

We’ve read many inspiring success stories of ordinary people who’ve accomplished or achieved something amazing. These aren’t just reserved for Olympic athletes or famous movie stars. Six weeks after being introduced to San Shou kickboxing Tim Ferriss (author of The 4-Hour Workweek), won the national title. Tim worked with medal winning trainers, spent hours each day in the ring and weight room, and focused on winning. Tim attributes most failures not to a lack of skill or aptitude, but to a lack of belief in the ability to achieve the goal.

Real Versus Imagined (or BELIEVED)

You’ve heard of the placebo effect. I read an amazing story about a study done at Baylor College of Medicine. Some patients received actual arthroscopic knee surgery and others received a pretend surgery. The pretend surgery involved incisions similar to what they’d receive in the actual surgery, but nothing else. At the two year follow up, patients who received the pretend surgery experienced improved relief of pain and knee function at the same level as the patients who underwent arthroscopic knee surgery. The patients who underwent the pretend surgery believed they actually had the surgery and expected the surgery to reduce their pain and improve their mobility. They got the outcome they believed, in spite of not having the real surgery. WOW! I LOVE hearing stories like this that illustrate the power of our minds!

Another interesting tidbit is how our brain is conditioned over our lifetime to learn what to expect will come next – in spite of whether or not it happens that way. If our brain expects an outcome, we will often get that outcome – good or bad. It’s as easy to fill our minds with positive expectations as negative ones, so believe it is possible to achieve what you want. This retrains your brain to expect to achieve your desired outcomes. What positive expectations are you currently focused on?

Do you have a monkey on your back – also known as a limiting belief – that you’ve been carrying around, maybe since childhood? Limiting beliefs are thoughts that pop into your mind when you dream about what you’d like to achieve. You’ve probably said something like “I really want this, but…” What follows the “but” is your limiting belief and most often, it’s a false assumption. Limiting beliefs are frequently formed during your impressionable youth. They might be based on something told to you by your parents, a teacher or a friend. You may have formed a limiting belief following a negative experience. “I’m not good enough OR I’m not smart enough OR I’m not talented enough OR I’m not worthy of success” are some limiting beliefs we’ve heard or even thought ourselves. What you think about yourself and what you’re capable of are formed by these limiting beliefs and they can hold you back from achieving everything you want if you accept that it’s not possible. Do you have any limiting beliefs holding YOU back? If so, you need to identify them and replace them with positive, empowering beliefs. An effective way to do this is to form the opposite of your limiting belief. A limiting belief of “I’m too old to accomplish my goal” becomes “I can accomplish any goal because I’m the perfect age.” Affirmations are another great tool to use to strengthen your belief in yourself and your ability to achieve. Affirmations are one of my daily success habits and I encourage you to start saying them if you aren’t already! “I am capable of achieving my dreams and goals” or “I am worthy of success in all areas of my life” are two examples. Create your own affirmations or borrow from others – Louise Hay founder of Hay House – has one of my favorites “I am in the right place at the right time, doing the right thing.” P.S. I’ll talk more about affirmations in an upcoming blog post.

Slow and Steady DOES Win the Race

Cliff Young’s story is so inspirational! Cliff was a 61 year old potato farmer back in 1983. He entered a week long 544 mile physically challenging ultramarathon from Sydney to Melbourne with a winning prize of $10,000. Picture this…farmer Cliff shows up in rain boots and overalls. I’m sure you can imagine what the OTHER runners showed up in – the latest and greatest designer running duds in a rainbow of colors! Cliff had to convince race officials that he wouldn’t drop dead of a heart attack while running the race. He grew up on a farm without horses or four-wheelers to herd his flock. Before a big storm, he’d herd thousands of sheep on the family ranch – which meant lots of running without sleep for days!

At the crack of the start, runners bolted except Cliff – who chose to run at a slower pace. This slow loping pace was named “the Cliff Young shuffle.” Since Cliff wasn’t a trained runner, he didn’t have a coach, he didn’t read books or magazines on the sport, and he didn’t know of the recommendation to sleep six to seven hours each night during an endurance race. Cliff slept TWO HOURS the first night while the other runners slept, and this gave him a lead which he maintained the entire race. Another night, he only slept one hour, running 23 hours. Cliff won the race ten hours ahead of the second place finisher. In 5 days, 15 hours, and 4 minutes Cliff had run 544 miles, beating the previous record in which the runner took two additional days. The moral of the story? It’s not what you don’t know that keeps you from your success – it is what you do know that isn’t true!

Starting today, challenge any assumptions that have held you back and BELIEVE IT IS POSSIBLE!
Replace your limiting beliefs with positive, empowering ones and speak aloud positive affirmations each day.

As a footnote, “I BELIEVE” is one of my daily mantras. I joke that it’s tattooed backwards on my forehead, so that when I look in the mirror I’m reminded of this. If you follow me on Facebook, you’ll see me include this OFTEN on my posts and in the comments of others.

I know you have an amazing story to share – one where you believed it was possible and you achieved your goal. Please share it in the comments!